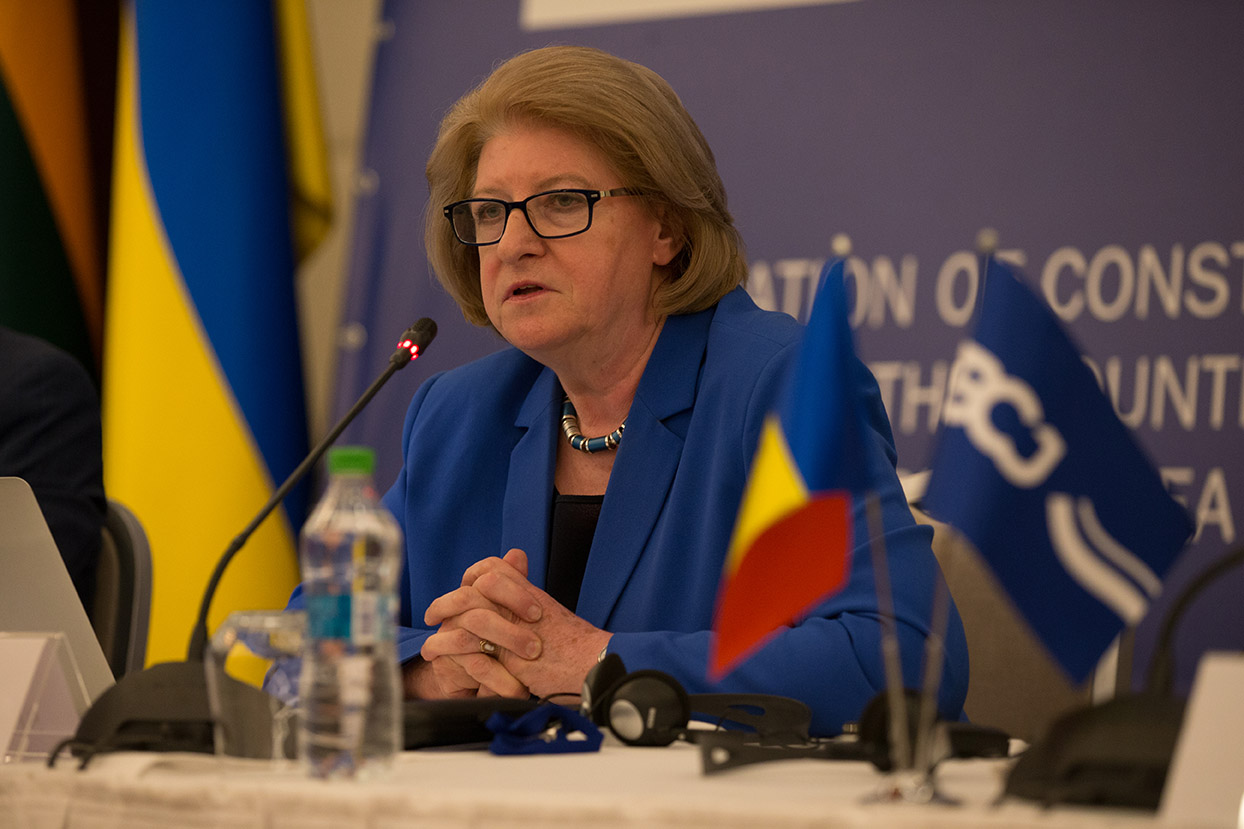 First of all I would like to express my thanks to the President of the Constitutional Court of Moldova for having invited me to take part in this meeting. It was a pleasure for me to be here today and  to represent the Venice Commission as its honorary president. For that reason I would like to concentrate myself on the topic which is entitled:  “Opinion of the Venice Commission on the place of the constitutional justice in a democratic state of law”

I can start with the quotation from  Roscoe Pound:  “When the lawyer refuses to act intelligently, unintelligent application of the legislative steam-roller by the layman is the alternative.”[1]

It is, in my opinion,  an accurate description of the relationships between law and politics, especially in the law making process, between parliament and constitutional court.

The history of constitutionalism is nothing more than man’s quest for a limit on the absolute power of its bearers and an attempt to create a spiritually, morally and ethically justified authority in place of subservience to the exiting power’s absolutism, as Loewenstein wrote.

In the most concise manner possible, those words encapsulate the very essence of a constitution as well as answering the basic question as to why we need a constitution and what role it plays in a democratic state, and why the constitutional justice is so important.

The basic question therefore is whether a constitution truly constitutes a fundamental legal act or whether it is simply treated as an incidental political document. It is important therefore to build a conviction that the constitution is not only an instrument used in various political situations for the convenience of various political groups. The constitution may not be a political bargaining chip in the hands of the ruling elite, but must display elements of permanence. One of the principal values of the constitution is creation of the framework of a state’s activity,  i.e. one that gives the citizen certainty and security, as well as a state in which the authorities’ scope of power is restricted. Whilst considering that idea, it should be added that a constitution is needed to set the limits of a state’s activities, that it might not place itself above its citizens, but should also give people assurances of their existence as citizens who enjoy rights and benefit from protected liberties.

Hence, both the manner in which a constitution is adopted, as well as the way it is deployed must create in society the conviction that by its very nature the constitution is a stable act not subject of instrumentalization under the influence of changing political climates.[2]

Constitutional order, as such,  in the state of law is a basis of the legality of the functioning of the state. Constitution itself however, despite its supremacy in the system of sources of law, is very often a subject of misinterpretation and overinterpretation  by different state organs (political power) which leads, in effect, to the depreciation of the democratic standards. For that reason, to avoid this negative effect, the idea of constitutional justice was so crucial and has been spread out after the World War Two.

In a wide part of the Central and Eastern Europe year 1990  marked  a time for the beginning of, what could be called, the realization of the idea of the constitutional control of law in this part of the world. All countries which  started with a political transformation tried to build a democratic system based on  the principle of checks and balances. One of the important element of this system was a idea to create a separate, from the ordinary courts, an autonomous and independent body whose role was control  constitutionality of law.  It was a time when exchanges of information and ideas between the long-established and new democracies were extremely important. For that reason the Venice Commission decided in 1992 to set up a documentation centre to foster a mutual exchange of information between the courts and to inform the interested members of the public about their decisions.

The establishment of the Joint Council on Constitutional Justice, ten years later, in 2002, institutionalised the cooperation between the constitutional courts and the Venice Commission, further underlining the important role of the participating courts in the Commission’s activities.[4]

The establishment of a constitutional court is a kind of catalyst in a society in transition to democracy, the protection of human rights and the rule of law. In addition to protecting the individual rights set out in the Constitution, the Court ensures that the state powers remain within the limits of the Constitution and settles conflicts between them.

Throughout the strong discussions which had place in various countries on the type of political reforms in the period of transformation,  the axiom of the role of the constitution and the autonomy of the court adjudicating on the compliance of laws with the constitution, has always remained intact.

That fact  was pointed out by the Venice Commission in one of its opinion that the “prevailing practice in the new democracies to protect the constitutionality of the new legal order by a specific, permanent and independent judicial body  can only be welcomed. (…)” .[5]

The separation between Constitutional Court and the ordinary judiciary probably represents the most widespread model in Europe. It does not mean however that there is only one uniform system of organization of the constitutional control.

As it  has been pointed out in the check list prepared by the Venice Commission on the rule of law: “The Venice Commission usually recommends providing for a constitutional court. However, it does not consider that it is an element of the European constitutional heritage that must be followed by all countries. What is essential is an effective guarantee of the conformity of governmental action, including legislation, with the Constitution. There may be other ways to ensure such conformity.”[6]

The VC , as it was indicated many times in its various opinions, is sensitive to differences of culture and context in which democracy has to be rooted. There are different situations in different countries  with varied backgrounds and experience. Even as concerns the constitutional justice  there is no single model which applies to all countries.  The richness of legal culture in Europe is precious and should be safeguarded.

In order to give justice to the sensitivity of its work, the Commission, in all its activities but especially in the process of adopting guidelines and opinions for individual states, makes a clear division between the two categories of matters:

1)  matters which constitute the fundamentals of the European democratic tradition (European standards) and, therefore, must be interpreted in a mandatory way;

2) matters which belong to the area of the margin of appreciation because they are rooted in various  local traditions. While the fundamental standards cannot be put into question, there is always a certain room for various modalities of their implementation in good faith.[7]

The Commission should work on the assumption of State margin of appreciation in dealing with constitutional problems. But this is not always possible because some principles and values must be interpreted in a mandatory way and are not a matter of choice.[8]It is a constitutional justice.

There are pillars which are common for the whole system of constitutional justice.  It seems worth to  quote here the opinion of one of the former members of the VC, British professor J. Jowell, who said that “Democracy  contains a set of absolute standards from which there is limited scope for deviation.[9] To such standards belongs undoubtedly the constitutional justice and independence of judiciary based on the principle of the division of powers and the mechanism of  checks and balances.

In democracy there are such areas which are and should be independent from the changes  of political power. One of them is the conviction that judgment of the court on the constitutionality of law is “something” which keeps the whole system in balance.

Venice Commission in its opinions  indicates certain substantive issues that are essential for ensuring the autonomy and impartiality of constitutional courts.

To the main, crucial  pillars in the opinion of the VC for the whole system belong:

– composition of the constitutional courts, durability  of the mandate of judge,

– procedure before the constitutional courts,

– valid and biding effect of the judgments of the constitutional courts.

Legitimization of the constitutional court and its ability to fulfill its functions depends in major part on its composition and the system of election of judges. It has been said many times that appointment of judges done in transparent and politically balanced way is condition, which allows the various stakeholders and the public in general,  to trust in the impartiality of the Court.[10]

The right to a fair trial imposes the implementation of all courts’ decisions, including those of the constitutional jurisdiction. The mere cancellation of legislation violating the Constitution is not sufficient to eliminate every effect of a violation, and would at any rate be impossible in

cases of unconstitutional legislative omission. This is why the Venice Commission underlines the importance of Parliament adopting legislation in line with the decision of the Constitutional Court or equivalent body. What was said about the legislator and the executive is also true for courts: they have to remedy the cases where the constitutional jurisdiction found unconstitutionality, on the basis of the latter’s arguments.

As it has been strongly pointed out in the opinion on Poland “Crippling the Tribunal’s effectiveness will undermine all three basic principles of the Council of Europe: democracy – because of an absence of a central part of checks and balances; human rights – because the access of individuals to the Constitutional Tribunal could be slowed down to a level resulting in the denial of justice; and the rule of law – because the Constitutional Tribunal, which is a central part of the Judiciary in Poland, would become ineffective. Making a constitutional court ineffective is inadmissible and this removes a crucial mechanism which ensures that potential conflicts with European and international norms and standards can be resolved at the national level without the need to have recourse to European or other subsidiary courts, which are overburdened and less close to the realities on the ground.” [12]

[10] CDL-AD(2009)014 Opinion on the Law on the High Constitutional Court of the Palestinian National Authority, paragraph 48., Compilation of VC opinions, reports and studies on constitutional justice, CDL-Pl(2015)002;

[11] VC expresses serious concern over statements made by the President of Turkey who has declared that he will not respect a recent judgment of the Constitutional Court of Turkey and has moreover threatened to abolish this Court. As a Member State of the Council of Europe, Turkey is bound by the Council’s fundamental principles, that of democracy, the protection of human rights and the rule of law. These threats against the Constitutional Court of Turkey are in clear violation of the Council of Europe’s fundamental principles.

Furthermore, the Venice Commission is concerned about problems and delays in appointing judges to the Constitutional Courts of Slovakia and Croatia based on information it has received.

As concerns Georgia, the Commission is concerned about public calls from the executive to terminate the mandate of the President of the Constitutional Court, which risks undermining the authority of this Court. A specific opinion, dealt with amendments to the Law on the Constitutional Tribunal of Poland.

© 2022 Association of Constitutional Justice of the Countries of the Baltic and Black Sea Regions  Created by PLATFORMA.MD